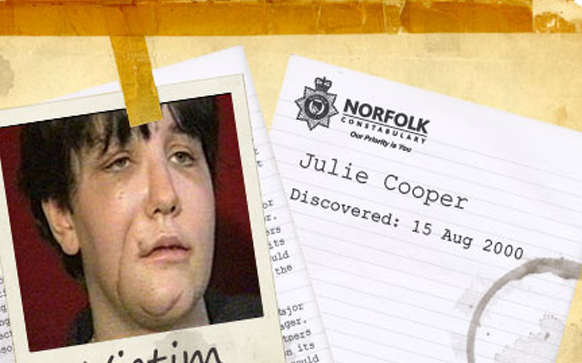 Julie Cooper was 28 years old when she was viciously attacked and robbed of her handbag as she walked to work at lunchtime on Tuesday 15 August 2000.  The attack took place on a cycle path close to Norfolk County Hall, Martineau Lane and a local industrial estate at Europa Way, Norwich.

Julie suffered horrific injuries to her face and upper body caused by a knife or other sharp weapon. It was only as a result of the expertise of the medical profession that she survived this attack and has since been able to rebuild her life to lead a successful business career.

The attack was ‘out of character’ for that area of Norwich. There had been no previous reports of similar offences leading up to this attack. The location was a very busy traffic route in and out of Norwich city centre. However, the path that Julie walked that day was heavily overgrown. Where Julie was attacked would not have been easily seen by other people.

Despite a major police investigation into this attack no person has been identified as being responsible for this attack.

The attack was featured on many TV appeals including Crimewatch and the sight of Julie’s injuries to her face shocked many parts of the community, yet no information ever came forward to name the attacker.

An appeal for new information to help solve this case. 18 years have elapsed since Julie was attacked and some people may have not been prepared to come forward at that time. However, this may have changed and it would be good to help establish why this happened to Julie and give her closure on this part of her life.