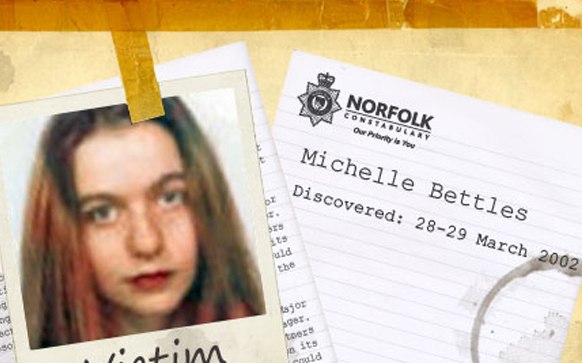 Michelle Bettles was 22 years old when she was murdered. Michelle operated as a street prostitute and was last seen in the red light district of Norwich during the early hours of Thurs 28 and Fri 29 March 2002 Easter weekend.

Michelle unusually had not kept a pre-arranged appointment with a regular client of hers. They had arranged to meet close to her home address in the Dereham Road area of Norwich but she never kept the appointment.

CCTV footage shows Michelle walking along St Benedict's Street towards the city centre at 8.20 pm that night. Clearly, for whatever reason, she had never intended to keep the appointment with the regular client since she was heading in the opposite direction to their pre-arranged meeting.

There was a series of sightings of Michelle in various locations in the red light district of Norwich by people that knew her, the last being at about midnight.

On the morning of 31 March 2002, Michelle's body was found by a local resident in woodland by the side of a country track known as Rush Meadow Road in Scarning, near Dereham. She had been strangled. This is around 20 miles from the Red Light District area of Norwich.

A murder investigation was launched but the killer was never identified. The case remains unsolved.

Appeal for new information continues to be a key point to help solve this murder. It is now more than 17 years since Michelle was killed and some people may not have been prepared to come forward to speak to the police about what they know of this case.